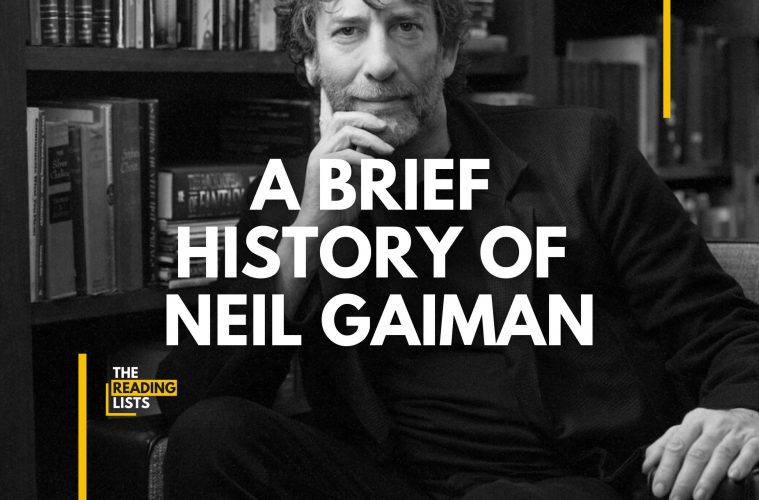 A Brief History of Neil Gaiman

Enjoy this brief history of Neil Gaiman. But, who is he? Neil Gaiman is a renowned author, screenwriter, and comics creator whose works have captured the imaginations of readers and audiences for many years. He is known for his unique blend of humor, horror, and heart in his stories that explore different themes such as mythology, folklore, and human nature. Gaiman’s ability to weave together diverse genres and influences has earned him a reputation for creating truly original and enduring works. If you are a fan of storytelling, you should definitely check out the work of Neil Gaiman. Let’s learn more about the popular author.

A Biography of Neil Gaiman

Where was Neil Gaiman born?

Neil Gaiman was born on November 10, 1960, in the town of Portchester, Hampshire, England. He was born into a family of Jewish heritage, his father David Bernard Gaiman was a salesman of electronics, and his mother Sheila Gaiman, was a pharmacist. Growing up, Neil Gaiman was an avid reader and had a passion for books, stories and comics. He was educated in several schools and was a voracious reader from a young age, apparently able to read from the age of four. He was particularly fond of the works of C.S. Lewis, J.R.R. Tolkien, and Ursula K. Le Guin. His love for stories and storytelling would later go on to shape his career as a writer and creator.

Where did Neil Gaiman go to college?

Neil Gaiman did not pursue a traditional college education after finishing high school. Instead, at the age of 17, he decided to pursue his passion for writing and storytelling by embarking on a career as a freelance journalist. He began writing for alternative and underground comics, honing his skills as a storyteller and building a reputation in the industry. Through hard work and determination, he gradually transitioned into writing novels and screenplays. He was able to establish himself as a successful and critically acclaimed author and comics creator, despite not having a college degree.

He is a self-taught writer and his works have been widely recognized and praised for their originality, creativity and storytelling. He has won many prestigious awards such as the Hugo, Nebula, Bram Stoker, and Newbery Medals, and many others, as a testament to his talent and hard work.

When did Neil Gaiman start writing?

Neil Gaiman began writing at a young age and has been writing professionally since the early 1980s. He

started writing for alternative and underground comics and then began writing novels, screenplays and many other types of writings. He has been published in many forms of media, from comics, to novels, to poetry and songs, to essays, to screenplays, and more. His first published work was a short story in a small press magazine in 1984, and he continued to write comics, novels, and other works throughout the 80s and 90s, gaining recognition and acclaim for his unique voice and storytelling style.

His first actual novel, “Good Omens” was co-written by Terry Pratchett and was published in 1990. It is a comedic fantasy novel which was well-received by the audience and critics. This was his first work in the novel format and it was a great success. The book was a New York Times bestseller and it was nominated for the Hugo and Locus awards. It was a great start for his career in the novel format and from there he went on to write many more novels, which have been widely recognized and praised by critics and readers alike.

What is Neil Gaiman’s writing style?

Neil Gaiman’s writing style is characterized by its imagination, wit, and storytelling. He is known for his ability to weave together different genres, such as fantasy, science fiction, horror, and mythology, to create something truly original. His stories often explore the human condition, and he has a particular interest in mythology, folklore, and the supernatural. He is also known for his use of dark humor, irony and sarcasm in his work, which makes his writing unique.

Gaiman’s writing is also known for its depth and complexity, as he often explores big ideas and universal themes. He is able to create a sense of wonder and enchantment in his work, while also tackling serious and thought-provoking subjects. He is highly descriptive and poetic in his writing, and his language is rich, evocative, and often poetic. His writing is also marked by a strong sense of characters, and the development of characters is one of the hallmarks of his writing.

Which Nail Gaiman book should I read first?

When it comes to choosing which book by Neil Gaiman to read first, it depends on your personal preferences and what type of story you’re interested in. However, one book that might be a great place to

start is “American Gods“. This fantasy novel is a bestselling, critically acclaimed work that explores the world of gods and goddesses in modern-day America. It is a masterful blend of fantasy, mythology, and Americana, and it showcases Gaiman’s ability to weave together diverse influences and genres to create something truly original.

The story follows the character of Shadow, an ex-convict who gets caught up in a war between the old gods and the new gods of technology, media, and celebrity. It is a story of power, belief, and the human condition, and it is filled with memorable characters and unforgettable scenes. It also highlights Gaiman’s use of dark humor, irony and sarcasm in his work, which makes his writing unique. “American Gods” is a book that has something for everyone, it’s a great blend of fantasy, mythology, and human emotions and it’s a great introduction to Neil Gaiman’s writing and storytelling style.

Which Neil Gaiman book is the best?

One book that is generally considered to be one of Neil Gaiman’s best works is “The Sandman” graphic novel series. This series is a groundbreaking and critically acclaimed work that has had a significant impact on the comics industry and popular culture. The series explores the world of Dream, one of the Endless, and his interactions with humans, gods, and other entities.

The story is a blend of fantasy, mythology, and horror, and it showcases Gaiman’s unique storytelling style and his ability to blend different genres to create something truly original. It is also known for its complex and multi-layered narrative, its memorable characters, and its exploration of universal themes such as power, belief, and the human condition. The series received numerous awards and accolades and is considered a masterpiece of comics literature. It’s a must-read for any fan of comics and graphic novels.

How many books has Neil Gaiman written?

Neil Gaiman has written a wide variety of books throughout his career, including novels, comics,

children’s books, poetry, non-fiction, and screenplays. He has written several bestselling and critically acclaimed novels such as “Coraline,” “Stardust,” “Anansi Boys,” and “The Graveyard Book” among others. He has also written several successful and critically acclaimed graphic novels and comics series, such as “Black Orchid,” “Death: The High Cost of Living,” and “The Books of Magic” among others.

He has also written several children’s books such as “Crazy Hair,” “Instructions” and “Blueberry Girl” which were very well received. These books, along with his other works, showcase his unique storytelling style and his ability to blend different genres, such as fantasy, science fiction, horror, and mythology, to create something truly original. His works have been widely recognized and praised by critics and readers alike and have won many prestigious awards.

Neil Gaiman’s books are not generally considered to be hard to read. He is known for his clear and accessible writing style, and his stories are often engaging and easy to follow. However, some of his works do deal with complex themes and ideas, and some of his books are written for a more mature audience, so it might take more effort to fully grasp the meaning behind the story.

Some of his works also use more complex vocabulary and literary devices, but it doesn’t make them hard to read. Overall, Gaiman’s books are known for their imaginative and thought-provoking stories, and for the way they blend different genres and influences to create something truly original. They are often enjoyed by readers of all ages, backgrounds, and reading levels.

Why is Neil Gaiman important?

Neil Gaiman is considered an important figure in the world of literature, comics, and popular culture for a variety of reasons. Firstly, he is a bestselling and critically acclaimed author, known for his imaginative and thought-provoking stories that explore the human condition and universal themes. He has had a significant impact on the comics industry with his work on “The Sandman” graphic novel series, which is considered a masterpiece of comics literature and has won numerous awards and accolades.

He is known for blending different genres such as fantasy, science fiction, horror, and mythology in his stories, to create something truly original and enduring. His writing style is unique and distinctive, known for its imagination, wit, and storytelling. Gaiman’s works have a wide range of audience, they have been translated into many languages and are enjoyed by readers of all ages, backgrounds, and reading levels.

He is also known for being a great storyteller and his influence can be seen on many new authors and his work has been adapted into successful TV series and films. He is also a great advocate for reading and literacy, he has been involved in various programs to promote reading and writing, especially for children. Gaiman’s work has a long-lasting impact, making him an important figure in the world of literature, comics, and popular culture.